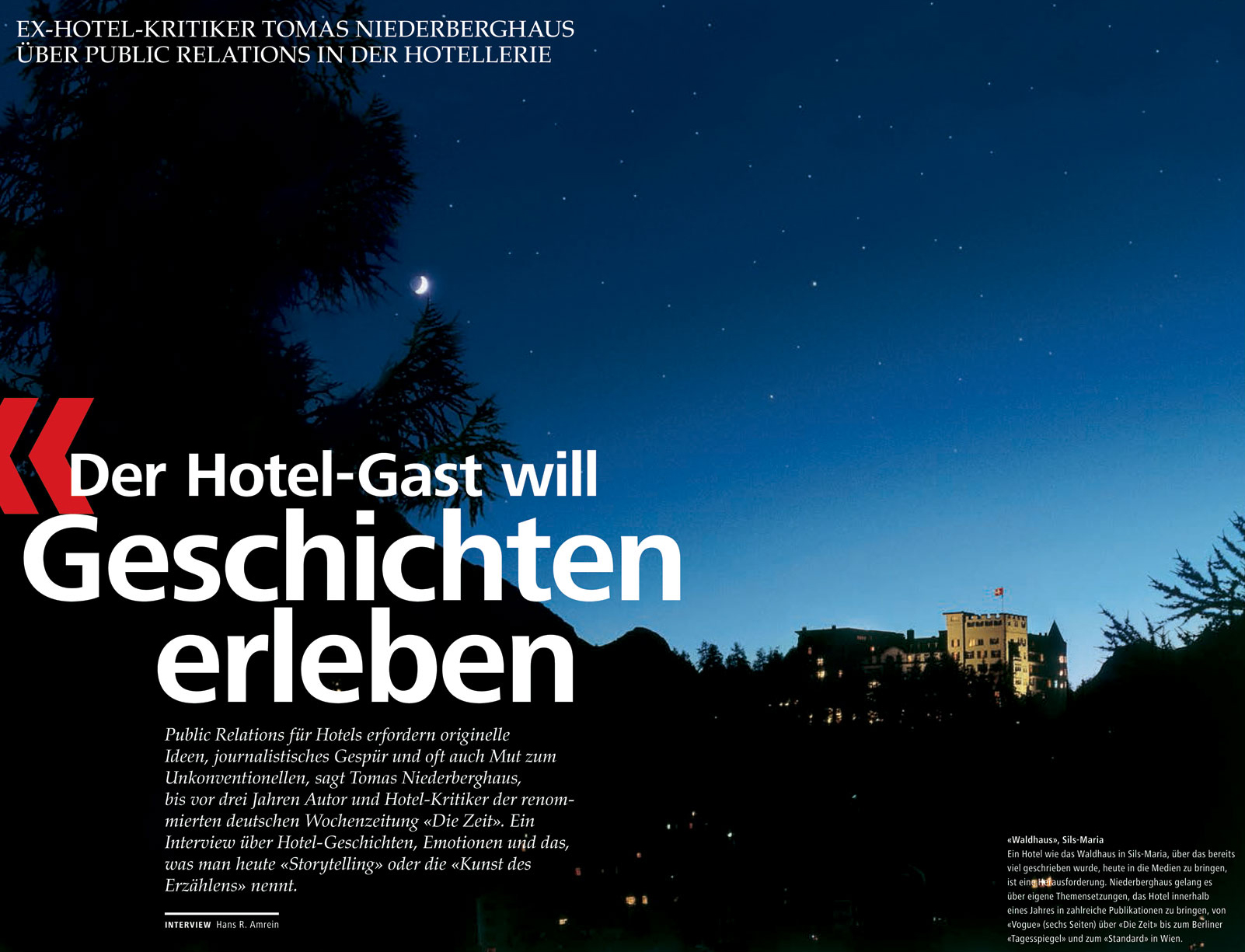 How do you define good press work and what is the difference between TN Hotel Media Consulting´s approach and other agencies? Hans Amrein, editor-in-chief of HOTELIER magazine asked Tomas Niederberghaus

Public Relations work for hotels requires original ideas, journalistic sensitivity and often the courage to do things a little bit differently, says Tomas Niederberghaus, until three years ago author and hotel critic at DIE ZEIT, Germany´s prestigious weekly newspaper. An interview about hotel stories, emotions and a phenomenon called „The Art of Storytelling“.

Hotelier: Tomas Niederberghaus, your agency name doesn´t include the expression PR but media consulting. Is that supposed to signal a wider range of services than a classic PR-agency would offer?

Tomas Niederberghaus: As a journalist working for DIE ZEIT, I was often surprised when it came to dealing with PR agencies and their level of involvement with their clients. Some didn´t even know the hotels personally that they represented. The press releases were often just a collection of hollow phrases. That´s why I tend to avoid the expression PR. When I do presswork for hotels these days, I still see them through the eyes of a journalist. I look there for themes, that the media could be interested in. If the customer wants us to, we also do folders or in-house magazines. Then all the texts and pictures come from one source only.

You work with journalistic principles. What´s the advantage for your hotel clients?

If you run a hotel for years, you might not be able to see it´s potential anymore – it´s like an old marriage. Hotel owners are hosts, Yield Managers and F&B experts. They are not experienced in copywriting and they are not media professionals. When I do research on a hotel, I try to understand the DNA of the place, I talk to the staff, I experience the building and finally I develop some themes/subjects. But not only the content of a message is important. The timing of it´s release also matters and which subject suits which media.

Can you give us some examples of successful PR concepts?

When I did research for our client Kärntnerhof in Vienna I found some archive material, stating that the house used to be a brothel in the 1950s. When the hotel reopened after some renovation works, I called it „the smallest Grand Hotel of Vienna“ and sent out a press release with the headline „From Brothel to Grand Hotel“. The owner was slightly anxious initially. But newspapers and magazines made his place famous in no time. Even some TV programmes picked up on the story.

The concept of „Storytelling“ is very popular right now. What´s the hype about?

Storytelling is simply the art of telling a good story. That involves a statement, which has to be true of course. It also involves an element of surprise and emotions. A story like that will be remembered and told again to others. Storytelling has always been the job of journalists. PR and social media have recently hijacked the idea and tend to overstretch it a bit, in my opinion.

How important is the language you use?

Very important! The language used for the media must not look like advertising. A headline containing just one word that smells of selling can make an editor press the delete button on your message.

How will PR work for hotels change over the next few years?

There are new hotels opening every day. The market is being virtually flooded right now. In addition there is the competition from Airbnb. And everyone wants attention and media coverage. It will become increasingly important for hotel PR to underline the unique characteristics of the house and create content for storytelling. That requires quirky ideas and continuous work. On top of that PR and marketing will interlock even more in the future.

Social media is a relatively new discipline for us, but they are gaining importance and will be an inherent part of corporate communication. A lot of representatives /players in the social media are not trained in storytelling though. That can be a big disadvantage. If 30 hotels tweet about their new drink at the same time, that´s 30 too many. The same is true for bloggers. Travel blogging in particular is still lacking professionals.

Editors today constantly receive information via all sorts of channel. That can create an overload. How do you manage to stand out from the crowd and get journalists exited?

With a good story, which doesn`t necessarily have to please everyone. It´s sometimes a good idea to polarize. One of our hotel clients recently hired a flying butler to take his guests on sightseeing flights around the area – an idea that we came up with.

Most PR is done swiftly, cheaply and comfortably via e-mail these days. Is it still worth it to send out an expensively created press kit via mail?

Whoever receives a handwritten letter on beautiful paper in this age of digital information flood is sure to appreciate it. It´s the same with press kits. It makes total sense for an outstanding hotel to send out this kind of special message. We all like to be surprised sometimes.

It is absolutely vital to stay in touch with journalists to see what issues are important to them or where their focus lies right now. Quite often a hotel article starts off at the lunch table.

Can you measure the success of good media work at all?

Definitely! After a while you have to draw the balance. You look at clippings and analyze what articles were published in which media and what quality they were. Good media work doesn´t mean shooting from the hip.